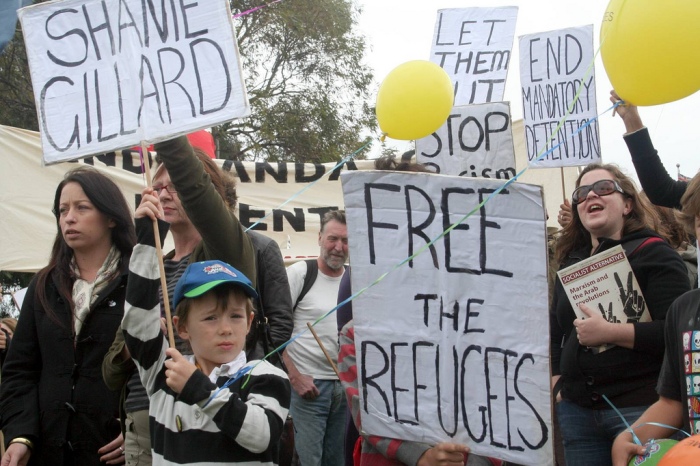 If there’s any story that dominates the headlines these days, it’s the story of the Trump administration’s zero-tolerance immigration policy.  Not surprisingly, all of the news coverage has inflamed passions on both left and right.  I’ve seen plenty of posts on Facebook promoting both the administration position and opposition to it, and plenty of debates about who’s right.

None of this has done anything to reduce my suspicion of Christians engaging in political partisanship.  If you want to vote, fine.  If you want to follow the news, fine.  However, moving past that point to political advocacy seems to me like it exposes us to manifold spiritual dangers without the possibility of spiritual gain.

I haven’t seen any news coverage of the issue (and admittedly, I’ve intentionally not read very much) designed to create thoughtful, balanced understanding.  Instead, it’s been designed to make the party faithful see red.  Issues are framed in the most provocative terms possible:  Government Tearing Families Apart!  Illegal Aliens Trampling the Constitution!

The devil likes that.  He likes it when he is able to fill our hearts with anger, fear, contempt, and self-righteousness.  For those of you who have debated the issue online, have you been able to do so without feeling any of those four emotions?

The devil likes it even better when he is able to use the political crisis du jour (and there is always some political crisis brewing) to distract us from our work.  I am quite certain that not a single person who reads this post will be able to affect U.S. immigration policy in a meaningful way, no matter how loudly they scream.  To borrow Stephen Covey’s language, this may be in our circle of concern, but it’s not in our circle of control.  All the effort we spend fretting over it and arguing about it will inevitably be wasted.

What’s more, once we waste that effort, it’s gone, and we can’t expend it on doing good.  The more we focus on faraway problems, the less we will do to solve the problems in front of us.

Let’s say you’re somebody who’s big into law and order.  You think all those immigrants need to stay on their side of the border, and you get all outraged when they don’t.  How dare they defy the law of the United States!

All right.  What about your next-door neighbor, who likely is engaged right now in defying the law of God?  That’s a much more serious problem.  What’s more, it’s something you could potentially affect.  How much time do you spend on Facebook earnestly appealing for sinners to submit to the authority of the King of heaven?  How much time do you spend talking to your neighbor face-to-face (which is a much more effective means of persuasion than Facebook)?

Now for the other side.  Let’s say you’re really bothered by the thought of children being separated from their parents.  Honestly, me too.  I don’t know much about the ins and outs of the issue, but I know that I’m pro-child.

If you truly care about children, let me suggest that spending hours debating the Fox News crowd online is not the most effective way to help children.  Regardless of what is happening to children a thousand miles away, there are children in every one of our communities who need our help right now.  Adoption, fostering (!!!), work with innumerable charities, and even being nice to the overlooked kids at church are all things we can do to meet the need.

At this point, people generally start arguing that they can be both-and Christians, that they can fulfill their responsibilities to the Lord without severing their political entanglements.  Frankly, I’m a little skeptical about that.  No one can serve two masters, especially when serving the second master produces all kinds of bad fruit and very little good.

Seriously.  Anybody ever seen an argument on the Internet change somebody’s mind, much less change the country?  I have, however, seen kindness to a child change that child.  The next time you feel like arguing, go out and be kind instead.

There are lots of things about our nation that I don’t like, to the point of Ecclesiastes 1:15.  However, Jesus didn’t say, “Fix the nation.”  He said, “Follow Me.”  I’m not supposed to run around trying to make other people change their lives (and isn’t that what politics is about?).  I’m supposed to engage in the infinitely more difficult work of conforming my own will to the will of Jesus.

Once we’ve got that down, I suppose we could get wrapped up in politics, if politics would still interest us.  Until then, in our hearts and in our lives, we’ve got more than enough work to do.