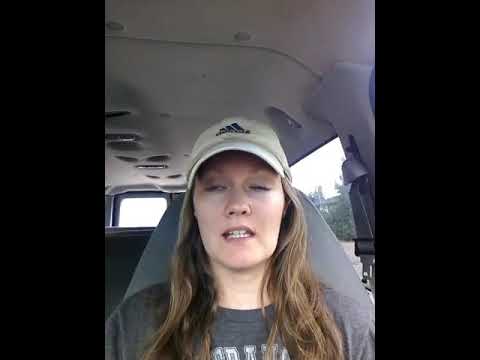 Yesterday, Shawn sent me a YouTube link to a video entitled “Why I Left the Church of Christ”.  I’m not going to link to it here, but if you search YouTube for the title, you shouldn’t have any trouble finding it.  He said it raised his blood pressure, and he figured that meant I would probably want to watch it and write about it.

He was right, so I clicked on the link and started watching.  After a few moments, I said to myself, “Hold on a sec!  That’s Amber Head!”  I’ve never met the sister (I don’t think, anyway), but I do know her husband, who has also left the faith.  He’s described his spiritual journey at considerable length online (I’m a fine one to talk, I know), so I suppose it’s not surprising that she would want to do the same.

She begins the video by calling “the Church of Christ” a denomination, which is the sort of thing that ex-members of churches often say.  Interestingly, though, everything else she says in the video serves to undermine the original claim.  First off, she says in the comments under the video that it isn’t a commentary on the beliefs and teachings of every single church of Christ worldwide.  Of course, if there were a singular denominational Church of Christ, her commentary would be universally applicable.  The video and the disclaimer are logically inconsistent.

Similar logical issues emerge in the content of the video.  She describes a loveless, graceless, lonely, perfectionistic church in which everyone lives under the constant dread of going to hell.

I believe that she is sincere in this description (though others who worshiped with her may want to dispute its accuracy), but it looks absolutely no-o-o-thing like my experience in the churches of Christ (and I’ve probably worshiped with dozens of ‘em).  I too was “raised in the church”, but my life has been rich with love, grace, and deep, emotionally vulnerable friendship.  I believe that I’m responsible for being faithful, but I’ve never thought I had to be perfect.  I’m not particularly afraid of going to hell, but with all my heart, I long to spend eternity with Jesus!

My point is not that Amber is a liar for saying that she experienced none of these things.  Instead, I think the vast difference in our experiences highlights the vast differences between the congregations that all have the same sign out front.  Are there churches of Christ out there where the members have such a grim, distorted view of discipleship?  I’m sure there are.  Every congregation is autonomous, after all, and there is nothing remotely resembling quality control for the teaching of those individual churches.  There are thousands upon thousands of them, each with its own personality, and no one person can possibly have enough experience of them to make confident declarations about “the Church of Christ”.

Indeed, all of this reminds me of the old parable about the blind men and the elephant.  The gulf between Amber’s experiences and mine is entirely attributable to our having encountered different parts of an elephantine brotherhood.  Compared to a real denomination, we’ve got about as much unity as the Legos scattered over my son’s bedroom floor!  I’m fine with that; I don’t think brotherhood-wide uniformity is a legitimate spiritual goal anyway.

As I noted above, Amber’s description of her time in “the Church of Christ” (as opposed to a small handful of autonomous churches of Christ) is about as appealing as the gunk in a sink strainer.  She says that all she ever heard was teaching about doctrine and authority, and that the church’s position on authority is inconsistent, which leads her to reject the idea that authority is important altogether.

To me, this is a head-scratcher.  After all, I’m not the one who said, “Now as the church submits to Christ, so also wives should submit in everything to their husbands.”  The true church is a model of complete obedience to Christ’s authority.  There are all sorts of passages that confirm this.

Maybe “the Church of Christ” isn’t obedient.  I disagree with the examples Amber cites (I’ve written an article and presented a lecture on the authoritative force of Acts 20:7, for instance), but for the sake of argument, let’s say that she’s right.  We are inconsistent in our understanding of Bible authority.

The solution to the problem is not to reject authority as unimportant.  It is to submit to that authority more strictly and consistently.  Bring on the foot-washing and the holy kiss!  As always, though, those who complain about inconsistency want to throw the authority baby out with the inconsistency bathwater, and that’s logically unjustifiable.

Amber also insists that she never heard teaching on grace, that she thought she had to be perfect in her behavior, and that this emphasis on perfectionism kept her from forming close friendships with other Christians.  I pity her.  Truly, I do.  However, there is nothing in that experience that necessarily results from attending a church of Christ.

Indeed, that’s the kind of experience that attending a church of Christ should never generate.  Grace is at the heart of the Biblical pattern that all of us are theoretically trying to imitate.  Churches of Christ that don’t teach on grace aren’t following the wrong ideals.  They’re failing to live up to the ideals they do have.  They are betraying the spirit of the Restoration.

Thankfully, that hasn’t been my experience in my sector of the elephant.  For instance, Amber mentions how much she enjoyed really embracing 1 John 1 for the first time once she left the church.  To me, that’s jaw-droppingly bizarre.  I quote 1 John 1:9 at the end of nearly every sermon I preach.  I’ve said those words from the pulpit hundreds of times.  Literally yesterday, Shawn and I studied 1 John 1 together and exclaimed about how thankful we are for the grace of God in our lives.

Starting next quarter, I’m going to teach an auditorium class on Romans.  Think I might mention grace once or twice in that study?  Other adult classes on the Jackson Heights menu for this year:  “Faith”, “God’s Eternal Purpose”, “Philippians”,  and “Blessed Assurance”, to say nothing of the countless hymns about grace that we sing.  It is no exaggeration to say that God’s grace is a continual topic of conversation here.

I don’t know what kind of weird church never talks about grace, but if there is such a church, it’s another case where the members have to be careful not to throw the baby out with the bathwater.  The solution is not to abandon the Restoration project as wrongheaded.  It is to encourage the study of the vast tracts of Scripture that are about grace—as any effort to restore the first-century church must.  I’ve never met a church leader who would object to that.

Of course, the version of grace that we study is not the mental-assent accept-Jesus-in-your-heart pop-Christianity version that is so prevalent today.  Those things aren’t Biblical grace either.  When the grace of God appears, it trains us to renounce ungodliness and worldly passions, and to live self-controlled, upright, and godly lives in the present age.  Biblically speaking, grace is inseparable from obedience.  Faith is inseparable from authority.  If you extract one from the other, you’re left with a mess.

I’m sorry that the Heads have left the church.  I wish they would return.  However, I haven’t heard anything from either one of them that hasn’t been said a thousand times before by those who are looking for an excuse to do what is right in their own eyes.

I don’t know whether Amber’s experience is representative of the experience of those in churches of Christ today.  However, I do know that it’s not representative of first-century Christianity.  Regardless of failures along the way, I still believe that the effort to restore that ancient order is a noble one.  May we never mistake the failures of men for a reason to turn aside from seeking the Lord!