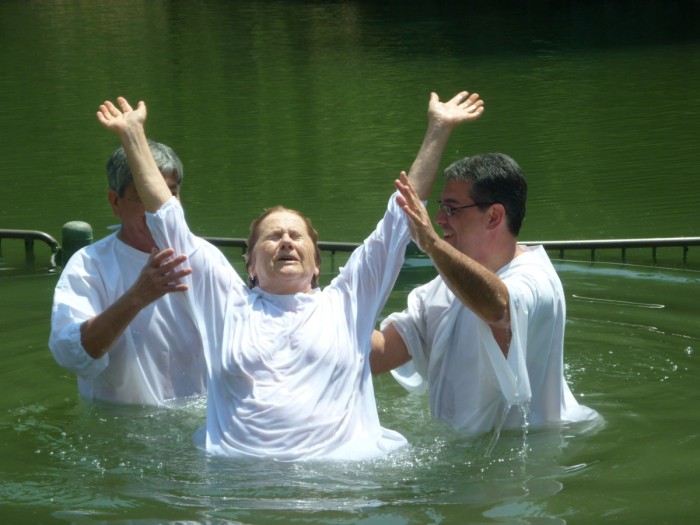 There are few subjects in the Bible that cause as much confusion as the subject of baptism.  I’ve always found this rather bewildering.  After all, there are at least a dozen passages that clearly outline why people in the first century were baptized, and why we should be baptized today.  One would think that the subject wouldn’t be difficult for anybody with a Bible and the reading-comprehension skills of a sixth-grader!

However, the opposite is true.  People have been misunderstanding baptism for centuries, and today, the misunderstanding is as widespread as ever.  They’re confused about the appropriate mode of baptism, which we don’t have time to discuss this evening, and they don’t understand why they should be baptized in the first place.

We need to address these errors for several reasons.  First, we have to understand the purpose of Bible baptism for the sake of our own souls.  If we get this wrong, we will be eternally lost because of our mistake, and that’s a sobering thought!  Second, we need to know so that we can teach others.  With both of these goals in mind, then, let’s look at several answers that people offer to the question, “Why should I be baptized?”

The first of these answers that I’d like to consider is “BECAUSE OF ORIGINAL SIN”.  Before we go on to evaluate this against Scripture, let’s pause to unpack it.  Here’s the thinking:  Back in the beginning, in the garden of Eden, Adam sinned.  Certainly, his sin stained his own soul and severed his relationship with God.

However, people who believe this think that the spiritual effects of Adam’s sin didn’t stop there.  Instead, they believe that because all of us are descended from Adam, we inherit from him the guilt of his sin.  As a result, even a newborn baby who has never sinned for himself is still guilty before God by reason of this original sin.  Naturally, people who believe in original sin also favor infant baptism.

If indeed it were true that we could inherit the sin of Adam, I would want babies to be baptized too.  However, this is simply not possible.  Look at what God says in Ezekiel 18:20.  It is definitely true that when we sin, we bear the guilt for that sin.  However, this passage tells us as plainly as it could be said that the guilt stops there.  The father does not bear the iniquity of the son, nor does the son bear the iniquity of the father.

My father was a righteous man, but even if he had been wicked, I wouldn’t have to worry about being affected by the evil he had done.  Even if he had been the most evil man imaginable, as long as I myself serve God faithfully, I don’t have to worry about suffering for my father’s sins.  Now, if it’s true that I don’t even inherit sin from my own blood father, how could any of us possibly inherit sin from our ultimate father Adam?   Original sin is a false doctrine, and it is no reason for anyone to be baptized.

Others say that we should be baptized “IN IMITATION OF JESUS”.  There’s certainly a sense in which this is true.  After all, we ought to try to imitate Jesus in everything we do.  However, this explanation can never be a completely accurate one because Jesus’ spiritual position and reasons for being baptized are so different from our own.

Consider the description of Jesus’ baptism in Matthew 3:13-15.  There is a lot in this text that tells us that Jesus’ baptism is unusual.  First, when He comes to John and asks to be baptized, John initially refuses.  He replies that Jesus should be baptizing him, not the other way around!  A few verses up, John has said that his is a baptism of repentance, and he knows perfectly well that Jesus, being sinless, has nothing to repent of.  The normal reason for the baptism of John doesn’t apply here.

However, Jesus tells John that Jesus needs to be baptized in order to fulfill all righteousness.  John is God’s prophet, and he has called everybody to be baptized, so everybody ought to be baptized, even Jesus, who doesn’t need it.  If Jesus doesn’t do this, then He leaves Himself open to accusations of hypocrisy from enemies like the Pharisees.

There’s an awful lot here that simply doesn’t apply to us.  Unlike Jesus, none of us have lived sinless lives.  Unlike Jesus, we cannot approach the waters of baptism in a superior moral state to the one doing the baptizing.  Unlike Jesus, we cannot be baptized to fulfill all righteousness.  I can’t speak for the rest of you, but I know that in my life, I’ve left all too much righteousness unfulfilled!  Yes, Jesus was immersed in water, but we can’t be baptized for the same reason He was because His spiritual condition does not match our spiritual condition.

The argument is also made that we should be baptized “BECAUSE WE HAVE BEEN SAVED”.  This is another version of the old line about baptism being an outward sign of an inward grace.  According to this way of thinking, people actually are saved by praying the sinner’s prayer or whatever, and they are only baptized to point back to the conversion that has already taken place.

There aren’t any passages that actually teach this straight out, but defenders of this doctrine will try to read it into others.  Consider, for instance, what they do to Acts 2:38.  They will take “for” and say that, rather than meaning, “in order to receive”, it means “because of”, like a soldier who receives a medal for bravery.

Next, some claim that we should be baptized “TO JOIN A CHURCH”.  To be honest, I’ve always thought this one was kind of weird.  You don’t have to do anything to be saved from your sins, but you have to be baptized to join a church?  However, I suppose that once you’ve rejected the idea that baptism is for forgiveness of sins, you have to cobble together some kind of explanation for all of the times that baptism is mentioned in the New Testament.  At that point, one explanation is just as good as any other!

Additionally, the Scriptures never say that we are added to the church by baptism.  Instead, the truth appears in Acts 2:46-47.  As soon as someone was saved from their sins, the Lord added them to the church.  It was an automatic process; the new Christians didn’t have to do anything else.

Conceptually, this makes perfect sense.  After all, the church isn’t some kind of institution with an independent existence apart from its members.  Instead, those members constitute the church.  The church is the assembly of the disciples of Jesus, nothing more, nothing less.  Once we put on Christ, there’s simply no way we can avoid being numbered with that group.

Finally, let’s test our own beliefs against the Scriptures.  Is it true that we are baptized “TO WASH AWAY OUR SINS”?  Well, let’s look at Acts 22:16.  Ananias, who said this in the first place, believed that baptism would wash away the sins of the man who would become the apostle Paul.  Paul, who repeated the story before the Jewish mob, believed it too.

You know, friends, it’s almost childish to make the point that baptism washes away sins, clothes us with Christ, saves us, regenerates us, raises us to walk in newness of life, and so on.  There are passages that say precisely these things.  It doesn’t take any great display of Biblical logic.  You just read the passages and say, “Yup; that’s what the text says.”  In fact, anybody who is mentally developed enough to need to be baptized is also mentally developed enough to understand these verses.

And yet, there are all these millions of self-described Christians out there who fight against this with all of their might.  There are all of these guys with seminary degrees who twist the Bible into a pretzel on these issues, all to establish that the text doesn’t say what it says.  Honestly, I can think of no better proof for the existence of the devil.  I cannot explain how so many people could take such a clear teaching and mess it up so badly unless Satan is real and he is blinding their minds.

Brethren, in an area where there is so much darkness, it is our duty to shine the light of the gospel.  Shawn talked this morning about how every Christian needs to be involved in evangelism.  Well, because the truth about baptism is so simple, it’s a truth that every one of us can teach.  All you have to do is show somebody Acts 22:16, and the text will speak for itself.  Really, that’s all personal work is—pointing people to the truth and getting out of the way.  If the person you’re talking to has an honest heart, they will obey it every time.