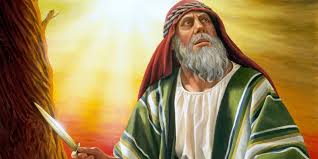 If there were a Mount Rushmore of Bible characters, Abraham’s face would definitely be on it. Abraham is first mentioned in Genesis 11. Four thousand years ago while living in Haran (and after the death of his father Terah), God spoke to Abraham and made three significant promises to him. In Genesis 12:1-7 God promised to make a great nation from his seed, this nation would take possession of a wonderful and special land (Canaan), and through someone from this nation all families of the earth would be blessed (a reference to Jesus). The rest of the Bible story is about God fulfilling each of these promises.

Many wonder why God chose Abraham to make these important promises to. There are many possible explanations, but the main reason has to do with Abraham’s faith. Abraham’s life is a great example of faith that pleases God. In fact, he is called the father of them that believe (Romans 4:11).

Consider a few lessons about Bible faith we can learn from Abraham.

Indeed Abraham left behind a great legacy of faith. In fact, his legacy is so great that he is mentioned by the New Testament writers almost 60 times!

Where are you in your faith? Is it weak? Is it lacking? If so, apply the great lessons from Abraham. Doing so will only enhance your relationship with God.

As we continue building the Biblical mountain, in our next blog we will fast forward in time several hundred years and consider the great servant of God, Moses.

One thought on “Building a Biblical Mountain – Part 2”